Law enforcement agencies in the U.S. and Europe on Thursday announced that they had disrupted a malware attack platform called GozNym. As part of the coordinated investigation, authorities in four countries arrested six suspects who face charges including money laundering, malware-writing and phishing. Five Russian suspects, however, remain at large.

GozNym has been tied to the theft of an estimated $100 million from over 41,000 victims around the world. The malware appears to have infected tens of thousands of PCs worldwide, primarily in the United States and Europe.

The suspects have been accused of using GozNym malware to infect victims' PCs and steal their online banking login credentials, accessing their accounts, then "stealing money from victims' bank accounts and laundering those funds using U.S. and foreign beneficiary bank accounts controlled by the defendants," according to Europol, the EU's law enforcement intelligence agency.

"We found that GozNym was a highly structured, specialized organized crime network, and each defendant represented in the indictment had a specialized role to play and brought a specialized skill set to the conspiracy," Scott W. Brady, U.S. attorney for the Western District of Pennsylvania, said in a Thursday press conference in Brussels.

Scott W. Brady, U.S. attorney for the Western District of Pennsylvania, discusses the GozNym investigation at a May 16 press conference in Brussels.

Authorities say this investigation was the result of cooperation between the U.S. and Bulgaria, Germany, Georgia, Moldova and Ukraine. An unusual aspect of the investigation is that charges were brought against suspects in the countries where they reside based, in part, on evidence gathered by the FBI and German authorities.

"The prosecutions are based on shared evidence acquired through coordinated searches for evidence in Georgia, Ukraine, Moldova and Bulgaria, as well as from evidence shared by the United States and Germany from their respective investigations," the U.S. Justice Department says.

Authorities say five suspects remain at large. All are believed to be in Russia, which did not cooperate with the investigation.

The GozNym takedown involved close cooperation between the U.S. Department of Justice and counterparts abroad, supported by coordination from Europol, backed by Eurojust, the EU's agency for handling judicial cooperation on criminal matters among EU member states' agencies.

"This takedown highlights the importance of collaborating with our international law enforcement partners against this evolution of organized cybercrime," says FBI Pittsburgh Special Agent in Charge Robert Jones. "Successful investigation and prosecution is only possible by sharing intelligence, credit and responsibility. Our adversaries know that we are weakest along the seams, and this case is a fantastic example of what we can accomplish collectively."

"It appears that the operators of Nymaim have recompiled its source code with part of the Gozi ISFB source code, creating a combination that is being actively used in attacks against more than 24 U.S. and Canadian banks, stealing millions of dollars so far," they wrote at the time.

"The new GozNym hybrid takes the best of both the Nymaim and Gozi ISFB malware to create a powerful Trojan," they wrote. "From the Nymaim malware, it leverages the dropper's stealth and persistence; the Gozi ISFB parts add the banking Trojan's capabilities to facilitate fraud via infected internet browsers. The end result is a new banking Trojan in the wild."

GozNym was spread at least in part via a cybercrime-as-a-service malware attack network called Avalanche.

Disrupting cybercrime-as-a-service providers: Steven Wilson, head of Europol's European Cybercrime Center, discusses the GozNym takedown at a press conference in Brussels on May 16.

Avalanche had victims in more than 180 countries and controlled as many as 500,000 malware-infected PCs worldwide at any given time, authorities said.

The Avalanche investigation resulted in the FBI and Europol, working with law enforcement partners in 40 countries, arresting five individuals, physically seizing more than three dozen servers tied to Avalanche as well as their taking technical steps to prevent repeat attacks - in part by sinkholing numerous domains. Europol estimated that the infrastructure used to run Avalanche, which had been in operation since 2009, every week lobbed more than 1 million emails carrying malicious links or attachments at potential victims. 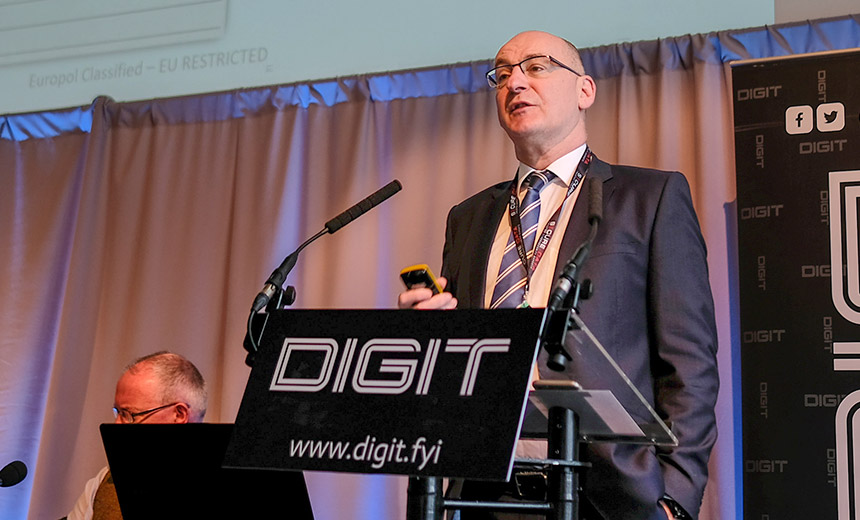 Disrupting criminal operations and arresting ringleaders remains a top goal for Europol. "Unless we can take these guys at the top level, they will continue to act with utter impunity," Steven Wilson, head of Europol's European Cybercrime Center, told the ScotSecure conference in Edinburgh on March 27. (Photo: Mathew Schwartz)

"What was GozNym, what were Avalanche? Cybercrime as a service, as we call it, but for me, for the public, it's a supermarket of cybercrime services," said Steven Wilson, head of Europol's European Cybercrime Center, during the Thursday press conference in Brussels.

"Looking at coders, malware developers, bulletproof hosters, a whole range of the cybercrime service under one roof - only through that international cooperation can we hope to tackle this," he said. 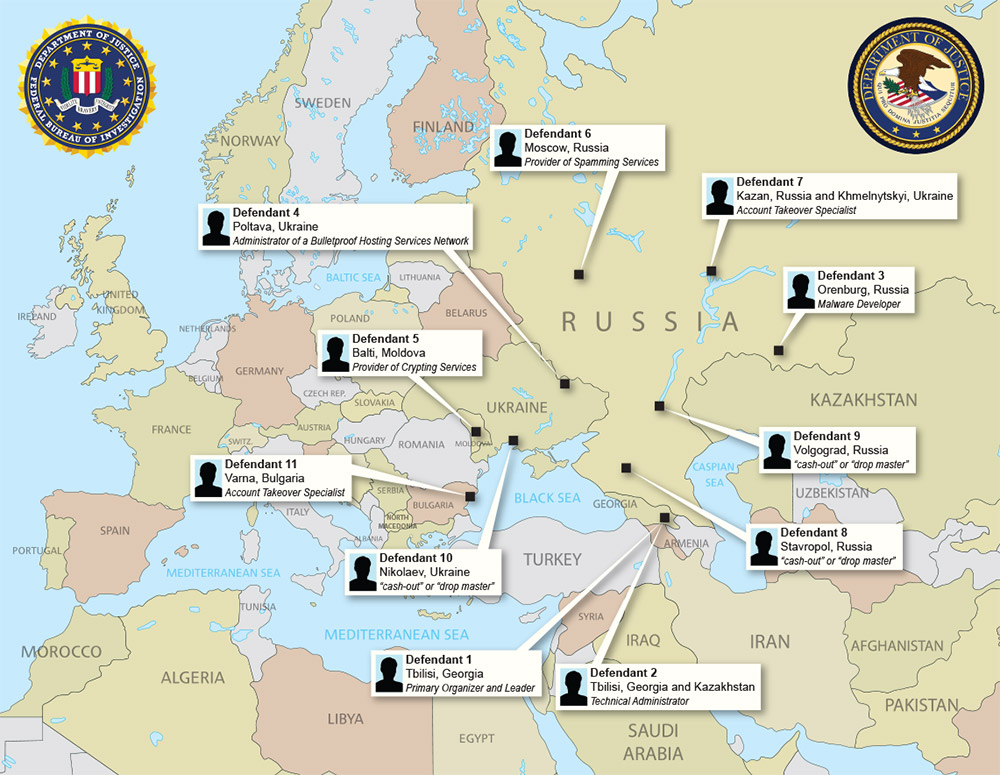 According to the indictment, six suspects have been arrested and charged:

Five suspects named in the indictment remain at large and authorities believe they reside in Russia. 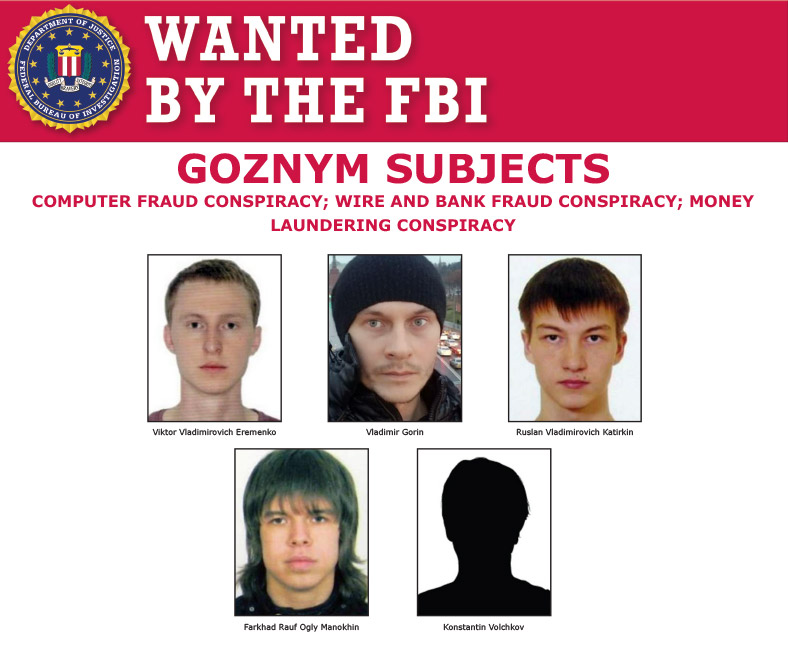 Why a Common Language is Critical: Understanding the MITRE ATT&CK Framework

The Self-Fulfilling Prophecy of the Cybersecurity Skills Shortage

MassMutual Taps Into the Power of Data Science

Derek Manky of FortiGuard Labs on the Shift to Proactive Defense